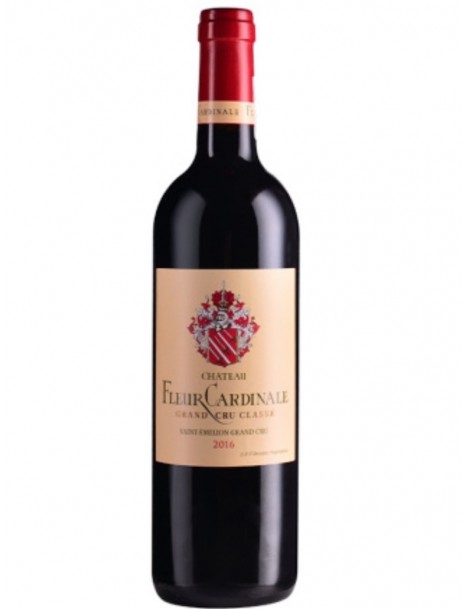 Chateau Fleur Cardinale is a red wine produced in the Saint-Emilion Grand Cru appellation. The domain, which covers an area of 23.5 hectares, has several red grape varieties planted: Merlot (76%), Cabernet Franc (18%), Cabernet Sauvignon (6%). The average vines are on average 35 years old. The soil consists of clay and limestone. The wine is aged for 12-14 months depending on the vintage, specifically in French oak barrels.

After a relatively complicated start of the year, due to heavy rainfall and frost at the end of March, flowering occurred at the end of May-early June. The month of July was perfect, which allowed for a rapid and even maturation. Pruning took place shortly before the expected drought in August. Water was retained by the famous clay-limestone soils after the rain of September 14th. These factors all contributed to the vines maturation.

With a sublime dark red color, Chateau Fleur Cardinale 2016 shows its suave and indulgent fruity character. Dripping in fruit and rich aromas, it is the result of diligent work in the vines. The tannins are both precise and creamy. This is a balanced wine that perfectly blends alcohol and acidity with an extremely fresh finish.

Wine Advocate-Parker :
The 2016 Fleur Cardinale is medium to deep garnet-purple colored and bursts from the glass with crushed blackberries, mulberries and chocolate-covered cherries with hints of spice cake, dried herbs and fragrant soil. The palate is medium to full-bodied and wonderfully elegant with soft, rounded tannins and a great backbone of freshness, finishing perfumed.

No customer reviews for the moment.